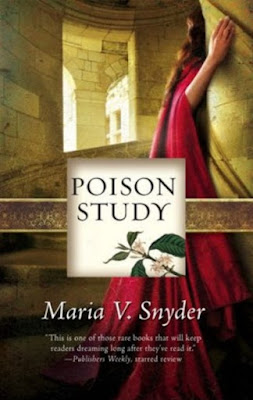 I can't believe this book had not caught my eye until a few weeks ago because it's really great. I was hooked from the very first page which rarely happens even with my most favorite books. From the beginning I was intrigued by the whole plot. I thought it would be something like the three dark crowns but it was better. I began reading this book at 2am and couldn't put it down until I felt a headache coming.

Yelena the main character is set to be hanged after she murders the son of a general but she escapes death by hanging in exchange for becoming the commander's food taster. Too bad for her since there seems to be many ways she could end up dead especially when she doesn't know who to trust. Life is hard for her. She has to keep looking over her shoulder, she discovers her magical powers and let's not forget her weird relationship with Valek.

This was a wonderfully written book. The plot was unique and the writing flowed very nicely that you just got lost in it. The characters could have been better especially Valek, he has so much potential. The "romance" in this book was so subtle I almost thought I was imagining it. Thankfully I wasn't I have  a knack for detecting it. I hope that at least it is developed further in the rest of the books.

I don't think there is anything new I can write about this book that hasn't been said however if you haven't read it I suggest you do, right now.