He is a YA/Fantasy author whose debut book- The Woodsman & the Moonlit Curse has recently been released (more details below) Read on to find out more about him and his new epic fantasy novel.

Tell us a little about yourself?

I’m a 25-year-old geek  living in the north east of England. I’ve always been an avid fan of fantasy, ever since I watched The Lord Of The Rings with my dad when I was a child, and this love carried into every aspect of my life. I studied Graphic design for 6 years, gaining a degree in the subject but find myself writing considerably more than designing. I love dogs and will literally cross the road to pet someone’s dog, which may seem strange to some people but I honestly can’t help it!

When I was younger, I wanted to be a game’s designer, much like many kids who spent too much time in front of the computer. I’ve always loved writing as a sort of hobby I could pick up whenever I wanted.

How did you start your writing then?

I have always loved reading but my writing began when I was probably about 9-10 years old.  I remember first being inspired by classic YA murder mystery, and writing a few of my own. Over the years it just sort of became a dream that I ignored until my wife encouraged me to work on the idea.

Tell us a little about your book.

My book follows the story of Jonaten Henrikson, a young Norseman that struggles to find his footing in the turbulent times of the Viking age as he is torn between duty and darkness. 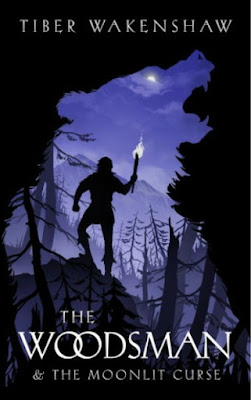 If you are into YA, Epic Fantasy and Vikings then you should get this book.

How did you come up with the names for your characters?

I would say that with the book being set in Norway, the main inspiration  came from Scandinavia, with several names and titles being directly translated from either Norwegian, Finnish or Swedish. For example there’s a race known as the Teravi, which is very similar to Terava, meaning “pointed” in Finnish. A few of the main cast’s names came from Names that I really like, such as Ana and Ruby, whilst others are the literal names of some close friends who I wanted to give a nod to in the story.
On average, how long does it take for you to write a book?

It’s a difficult one as I began writing The Woodsman back in 2013 but didn’t pick it up again until exactly 2 years ago, so I’d say 2-3 years, I could do it a lot quicker if I wasn’t so indecisive!

Did you have any kind of writing ritual when writing it?

Not so much but I did give myself a sort of routine, I guess. When I got married, I moved quite far away from work, about 3 hours travel each day so I spent this time writing every day. I also struggled with motivation to lose weight at the time and would often tell myself if I didn’t exercise then as punishment I’d have to write, harsh but it worked!

Do you have any unpublished/unfinished scripts and where do you keep them?

Where to start! I have dozens of ideas bouncing around my mind and various scraps of paper in my journals but there’s 4 or 5 in particular that I would love to work on, one in which is a mystery occult thriller following the strange happenings of two strangers set in a quaint 90’s American Suburbia. Think Stranger Things mixed with the Truman show, something completely different to The Woodsman yet really exciting.

What should your readers expect from this book?

Though it’s a fantasy book, I think that this story offers much more than the classic tropes of hero against villain. At its essence, the tale is one of hope, happiness,  love and loss, of failure and redemption. I believe a truly human protagonist and cast of characters gives way to a very human story that will be relatable on so many levels.

You can get The Woodsman &The Moonlit Curse on:
Amazon
Smashwords