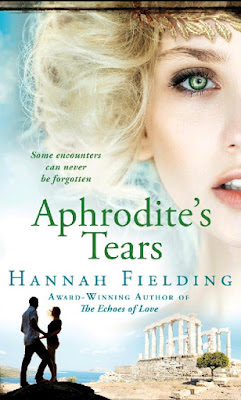 “Some encounters can never be forgotten”

Have you ever visited Greece? If you have I am so envious. If you haven’t, then welcome to the club.  This book has made me want to visit Greece so badly. All I can think about now is the beach, the hot sun warming my skin and the delicious food I can’t even pronounce.

Aphrodite’s Tears is a book on a league of its own in terms of authenticity and writing. Written with an abundance of colorful descriptions the author take us back in time to a 1970's Greece. In the first page we meet the heroine, Oriel. An advertisement on a newspaper for an archaeology job in an Ionian island brings back memories of the last time she was in Greece. Fresh from a heartbreak she had slept with a “Greek god” right at the beach under the moonlight but when she had woken up he was already gone.

Years later she meets him again after she is accepted for the advertised job. His name is Damian, and he is the owner of Heliades, the island where she is supposed to work. Even though the years have gone by, the passion and attraction that had brought them together that one night is still alive taunting Oriel even though she wants to stay away from him and with good reason.

Damian has changed from the man she had met those many years ago. He is scarred both physically and emotionally and he obviously has a lot of baggage from the tragedies that had struck him. In the middle of all this, is a crazy cousin, Damian’s former lover, a superstitious island of people and a bunch of female archaeologists who have been running way. Oriel is warned of all the problems that she will face but she ignores them until it is evident that someone wants to get rid of her.

As I said this book is on a league of its own. It reminded me of the books I would steal from my mom’s stash of books then spend the whole night giggling not completely understanding what I was reading. It has that “books written in a different decade” kind of feel. I had to check the publishing date to make sure it wasn’t a 70’s book. If that will not show how good the author is I don’t know what will. Steamy romance, drama and a good portion of Greek mythology this book has it all. I was glued to my tablet for long hours waiting to see what would happen next. Apart from being the best in description, the author has a way with suspense. She prolonged everything I wanted to read for so long. I don’t know who was more tormented, me or the characters. There was so much interruption, so much misunderstanding that made me want to lock the two in a room until they just made up.

Speaking of descriptions, I was a little torn when it came to how I felt about them. On one hand they were so beautiful and well written. I could picture the island perfectly. The smells, the sights and even the sounds could be easily imagined. The author is generous with her descriptions, something that I don’t see any more in the books I read.

On the author hand, there is only so much you can read when it comes to how manly and godlike Damian is.

A third of this book comprised of descriptions about Damian with the other third being about Oriel and her golden hair. A lot was written about Oriel’s pounding/thudding/ lurching heart and confused feelings. It is not a stretch when I say that half of this book was taken up by descriptions. It was nice to finally read them but half of them could have been done away with and this book would have still remained the same, only shorter.

With that said I absolutely loved the main characters. Oriel was a strong female character who was no pushover except when she was in Damian’s arms that is. Damian on the other hand was by far the most interesting and that is why he was my favorite character. He had more going on for him other than the “hot bad boy” trope. The whole scar thing was a good idea. A scarred hero is so much better than a perfect, smirking hero.

Another positive is that the author tries and succeeds in bring out the authentic and true Greek culture. I don’t know a lot about that particular culture but a good number of words are written in Greek. The greetings, the endearments, the food and even the sayings are all written this way with English translations.

The ending was just like the entire book. It was soooo dramatic but totally satisfying. Everyone got what they deserved and the happy ever after was achieved.

Check it out here: