Review: In Your Hands 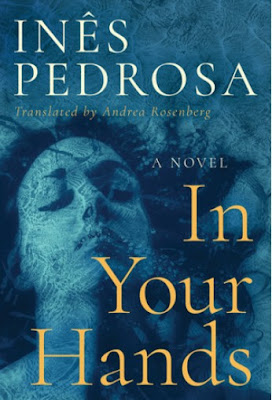 Title: In your hands by Inês Pedrosa
Pages: 224
Rating: 3 stars

In your hands by Inês Pedrosa is a story about three generations of women. The book is divided into three sections for each of the women. The story begins with Jenny’s (who is the oldest of the women) point of view. She is married to António, a gay man and she has to live with his lover, Pedro who has a daughter called Camila. It is a life of isolation and heartbreak even if the character sees it differently. I honestly don’t understand how she got through it.

Her story is told through entries into her diary which she addresses to her now deceased husband. She tells him about her life now that she is old. She talks about the past and her present, occasionally speaking about the other main characters, Camila and Natália. At a glance, and this was honestly my first impression of Jenny, one would think that she is weak but this is far from the truth. It takes certain strength for her to have lived the life she had and to have survived it. She could have easily become bitter and angry but she chose to remain and make the best of her life and even going as far as raising Pedro’s daughter.

The second section of the book is about Camila, whose life is plagued by one problem after the other. Unlike Jenny the events in her life make her cynical and withdrawn and a little bitter. Her daughter Natalia is the youngest of the trio. Her point of view is written as letters to Jenny. She talks about her failed marriage and her difficult relationship with her mother. Through Natália we get to see that Jenny was the one who held their relationship and their family together and in her absence it is not the same.

In Your Hands is a realistic depiction of the problems faced by women no matter the generation. Jenny was my favorite character even though I would never make any of the choices she did. I recommend this to people who enjoy contemporary and women’s fiction.
Labels: 2018 Arc fiction Netgalley women's fiction