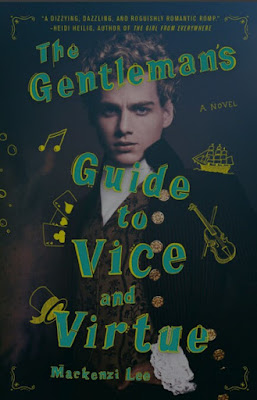 
The truth is that Percy has always been important to me, long before I fell so hard for him there was an audible crash.

Monty is an example of what a gentleman should not be. He drinks too much, gambles too much and then there is the matter of sleeping with both women and men. So when he, Percy and his sister Felicity set off on a grand tour the plan is to get his head straight so that he can come back and take over the family estate. Their grand tour  however does not go as they expect when they find themselves on the run because of something Monty did.

This is a 5 star one people. I can't believe I have taken this long to read it considering most of my friends have read this. For some reasons which I am going to state I just passed up this book. First I was not too keen on that cover. Omg! it was terrible and I always judge a book by its cover. The second reason was the name. Why is it so long and boring? That aside this book was a fun read.

Monty's thoughts on Percy were so overwhelmingly touching and so cute. Argh! Why are these characters not real and is there some way to make them real??

I found the whole plot to be more interesting than I expected. (I actually thought their forbidden love and their struggle with it would be the plot) thank goodness it wasn't because now as I think about it that would have been a cliché and a boring story.

I think the ending should have been different. Throughout the book you get to read instances where other characters tell off Monty that he always makes everything about him, and that ending, was all about him. Yes he is the main character but I would have preferred an ending that involved Percy and Felicity even if there is going to be a second book.

Everyone should give this book a try. It is sweet and funny with pirates and sinking islands.
Labels: Book Review Bookaholic Monty romance Tbr list