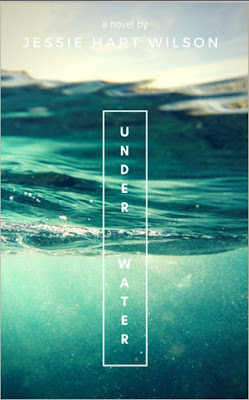 This book got me out of my reading slump!!!

Under Water is a book that surpassed my expectations in every way. It broke my heart and healed it at the same time over and over again. As the title suggests, there is a lot relating to water both literally and metaphorically. The main character lives on a boat in the open waters with her father (He) and her brother Cal. From the beginning, you get the sense that this is actually not a happy family. She is constantly listening to see if her father is nearby before she leaves her room in order to avoid him and her brother.

She refers to her father as (He) maybe to distance herself from him so us not to think of him as her father. It is better to think of him as “some person” and not as her dad when he does such monstrous things. The main character is constantly scared and is weighed down by her family’s secrets which in a way are drowning her, pulling her under water.

When she gets the opportunity to leave the boat to go to boarding school, all this baggage still weighs her down until a way out is given to her. When the headmaster convinces her to take up swimming she begins to wonder if she can finally swim away from her family and all her problems.

Under Water is a hugely emotional book, so be ready to feel lots of emotion from anger, to sadness, love and even burning hatred for the characters. The book is written using the main character’s perspective. The emotions you feel are mostly her own or influenced by her. Even though I would normally not read something like this, I really enjoyed this particular book. I loved the way the book was written and the characters were even better.

Mr. Tate was my favorite character in the whole book. It was impossible not to like him. He was such a nice, optimistic and happy character. He was such a contrast from the main character’s father who is a total monster. For one, he actually treats his wife and daughter with so much love and respect it radiates from the pages. I liked the fact that there was zero romance in this book. In most YA books, the main character always has to fall in love with someone. I don’t know if the authors think that this is what readers want, but it usually detracts from the main plot.

Let me tell you something about the ending. It was not what I was expecting. I am really good at predicting endings but I did not get this one right. It was better than I had expected even though it felt a little rushed to me. With all that said,

I highly recommend this book to YA readers.
Labels: 2018 4 stars contemporary recommend review YA