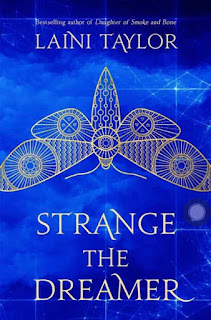 Strange the Dreamer by  Laini Taylor
Pages: 536
Rating: 4 stars
Verdict: I highly recommend it for all fantasy book lovers.

This book has been in my currently reading shelf for months. Somehow I could not get myself to read it. Honestly it's because I had seen it from the beginning, nice sweet characters like this? Something terrible was bound to happen at some point and no matter what, I always want the happiest endings. The author of course did not disappoint. That ending was just the worst thing ever. The only good thing about all this is that there is going to be a second book.
This particular book if I can describe it in a few words I'd say it's about dreams, yearning and nightmares. This is because these three things affect the story and the characters in it, going as far as changing some of them.
The book is called Strange the Dreamer and is mostly about Lazlo but it should be allowed that Sarai was also a very important part of this too. In fact I think the two are very very much alike. They are like two sides of a very rare coin that can only be found in Weep.
Generally the whole thing reminded me of a fairytale. You know only better and longer. I mean there was a hero, a damsel locked away in her "castle" and magic. The first part of this book was difficult to go through. I wanted to get to the second half so badly I was flying through the pages. Everything happens in the second half and I mean everything. The magic, the romance and the secrets are all there. So just hold on if you find it hard in the beginning.
Finally I recommend this book to everyone who loves fantasy. Just give it a try, you might be amazed.
**This book can be read as a standalone but that ending is frustrating. It will have you begging for the next book but if you think you can take it, go for it.
Labels: 2018 Book Review Bookaholic fantasy fantasy January review